‌What did we talk about?

Or listen to our podcast 🎧

A new round of the Atlassian Community Growth Spurt for October is here!

The top 25 most active members in the Teamwork Lab group have a chance to win great prizes. All you have to do is as much of the actions listed in the post, like Feedback on articles via comments Attend an event Welcome new members on the intro page, etc.

A very cool opportunity from one of the Atlassian community groups to hone speaking skills.  The Speaker Bench is calling out for new members to join the group and challenge themselves to speak at an Atlassian community event. This would be a great experience with plenty of friendly peers to provide support and encouragement.

Running through till the 1st October to the 31st December. Better still they are offering a speaker kit for those who have confirmed speakers at an event.

The Atlassian team announced the release of a new Team Managed project feature - the option to assign dedicated workflow for different Issue Types.

This means that from now on, you can be as granular as you want in a single project and have different predefined statuses for bug versus epics, for example.  The way this will work is once you edit your workflow and hit update, you'll be prompted to specify for what Issue Type this change should apply.

Also, once you generate a different workflow for an issue type, you'll see the columns break down per issue type workflow in the screen to edit kanban workflow columns. So you can customize statuses assigned to columns per issue type. Super neat!

A few Atlassian teams have given 4-days week a go to prove that people are just as if not more productive working four days instead of five.  However, for those of you interested in this experiment and who want to learn how these Atlassian teams found it, you can join the office hours to ask all your burning questions.

Atlassian invests another $75M in Snyk alongside Salesforce

Snyk is a great example of a promising company that has a unique perspective around developer security and is eager to revolutionize this space at an accelerated speed.

📚 Article of the week: The surprising, science-backed value of boredom at work

This is a super interesting read from resident Futurist Dominic Price, essentially telling us boredom is the secret to our creative blocks. The idea is that trying to be productive can actually hinder your productivity, especially for knowledge workers.

There is this very cool study that showed creative genius really boiled down to making unexpected connections that nobody has thought of before, a bit like your brain is a slot machine and every now and then you get a winning combo.

Dom points out how hard it can be to engage in divergent thinking when you don't have downtime from work and suggests booking in an hour a week to do anything except expect productive output. Neuroscientists recommend spending time learning a language can be a good way to focus on something entirely different and help get that psychological space from your work. 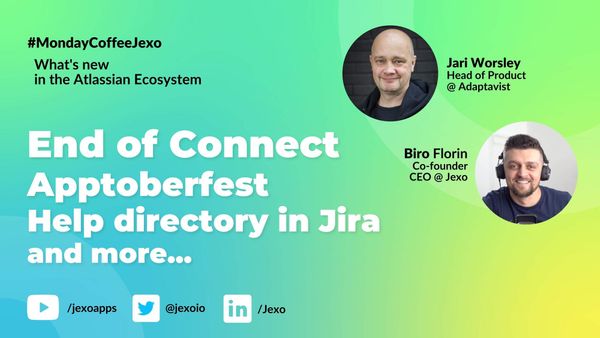 Jexo's weekly Atlassian News Roundup is here! This time we chat about End of Connect, Apptoberfest, Help directory in Jira, and more.