Atlassian named Leader in the 2022 Gartner® Magic Quadrant™ for ITSM

Atlassian was nominated as a Leader in the 2022 Gartner® Magic Quadrant™ for IT Service Management Platforms.

Congratulations to the Atlassian team!

Download the report to learn more about the evaluation.

We start the week of news with an announcement about new security requirements for app makers like us. This gives customers more confidence in installing and using apps like ours.

So tighten that belt as much as you need, Atlassian, we'll take it.
Jokes aside, Atlassian announced some improvements to the security program a while ago. This post confirms that these new requirements enter in effect as of 31st October.

There is extensive documentation on the updated security requirements for marketplace partner. Some of the updates include:

If you're an Atlassian Marketplace Partner, we recommend you make sure to read the article and comply as these changes are already launched.

New navigation will have projects in the left-side panel. Now you can switch between projects and different project views, such as timeline and Kanban. And the list will move to the top horizontal navigation.

There are also other improvements coming to Jira Work Management projects: dark mode, keyboard shortcuts in the list view, and so on.

Atlassian's Response to the OpenSSLv3 Vulnerability

On the 1st of November, OpenSSL security team published an advisory revealing vulnerabilities in versions of OpenSSL 3.0. The team also fixed the issues in version 3.0.7 and advised upgrading to this version.

In this regards, Atlassian published an announcement post highlighting that their teams were reviewing the Cloud, Server and Data Center products as well as Marketplace apps.

This initial post is the notification that they are aware and investigating. But if you scroll down the post, you'll see a comment 2 days later detailing their findings. Both Cloud and Server products are safe as they don't use the affected versions of OpenSSL.

The Atlassian team also mentioned they checked all Data Center and Server Marketplace apps as well as Forge ones and found no issues there.

They are still checking Connect apps. But given the fact that the code in Connect apps is not fully readable by Atlassian, the suggestion is to double-check your app libraries and code to make sure you're not affected.

For all Connect app makers. Take a look at the OpenSSL advisory, check your apps and if you're using OpenSSL before version 3.0.7, upgrade it in the shortest term.

There are a few great events organized by partners this week.

Navigate to Goosly calendar for details about these and more events in the Atlassian ecosystem.

And now to the great news for all Confluence admirers.

This brings the number of Confluence templates that you can use to more than a hundred!

And now to the acquisition news. Valiantys has entered an agreement with Addteq to buy out the consulting part of their business.

Valiantys has been in the news in spring and summer this year for having a majority stake acquired by Keensight Capital and then another round of investment from Tercera. Both of these partnerships enable Valiantys to expand its growth in the marketplace.

Last week, Valiantys announced the first in a suite of acquisitions in the upcoming period. They entered into an agreement with Addteq, Platinum Solution Partner focused on DevOps and Silver Marketplace Partner.

Addteq decided to focus on Marketplace app development and sell their consultancy business to Valiantys.

We wish both of these partners the best of luck!

And for the Article of the week, we'll have a look at the newly-released Atlassian's Q1 FY23 letter to shareholders.

The letter covers highlights of what Atlassian achieved in the last quarter, such as new Atlassian Together subscription offering targeting work management market, new large-scare event. But they also shared a feature of Atlassian Analytics that transitioned to open beta, the general availability launch is planned for this fiscal year.

Despite that, Atlassian added 6,550 new customers this quarter, bringing the total to 249,173. And the subscription revenue grew by 50% year-over-year.

Atlassian is also hiring and added 989 new Atlassians. They believe that hiring in the current economic situation is to their advantage.

If you're interested in more details and financial numbers have a look at the report.

How do you go about handling risks once you've assessed them; 4 options you've got as part of the TAME framework! 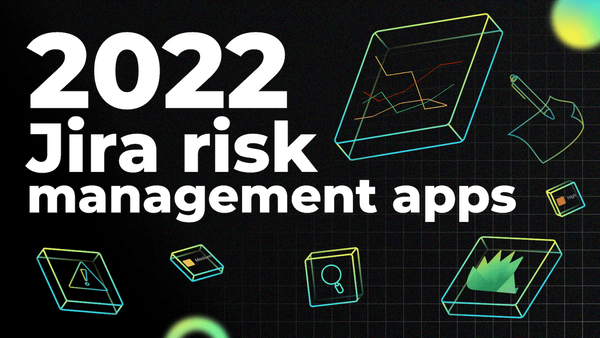 What tools can you use for tracking risks in Jira? This article includes pros and cons for the top Jira risk management apps out there in 2022!