Jira software was founded in 2002 by two Computer Science students in Sydney, looking for a way out of the corporate grind; ok, now that’s a lot of success stories with two guys and a dream!

According to the 15th Annual State of Agile Report, Jira is the most highly recommended Agile project management tool in the world; but that’s no coincidence. Jira has the most features out of the box alongside an insane plugin library, and it’s all about automating workflows; now who doesn’t want that?!

What does Jira mean?

The name Jira comes from Godjira or Japanese for Godzilla. Which makes sense because it goes hand in hand with squashing software bugs!

Gojira is roughly translated as ‘Gorilla the size of a whale’.

What does Atlassian mean?

The name Atlassian comes from Atlas in Greek mythology, a titan condemned to hold up the heavens or sky for eternity; and who by doing so, does the world an eternal service. Which makes sense as a representation of Atlassian’s legendary customer service beginnings!

This fact is derived from a genuine, down-to-earth podcast interview with Atlassian founders called “How I built this with Guy Raz”. Oh, and Atlassian is the adjective format of Atlas; atlas.com was taken! :P

How did Atlassian start?

Atlassian co-founders Mike Cannon-Brookes and Scott Farquhar met in 1998 while studying at the University of New South Wales in Sydney, both on a Computer Science Co-op scholarship. Mike opted out of the program early to do his own project (which he did) and then sold it to an established competitor for a decent amount of money.

In 2001 however, Mike sent an email to his course mates asking who’d want to help him launch a tech startup after graduation, and Scott was the only one to respond… and that was that.

They both shared a passion for computers and a frustration for the corporate grind. And so together, they launched Atlassian, a tech support service that they managed from their bedrooms at all hours of the night. Unable to make money at first, Scott and Mike decided to change things a bit and start selling some of the software they had developed to support this business of theirs. Life is such a play I swear!

Out of that grew Jira, a project-management tool that is used in all sorts of endeavors, from producing medicine to exploring Mars! Today, Atlassian is valued at over $50 billion,  and Scott Farquhar and Mike Cannon-Brookes are Australia's first startup-to-IPO tech billionaires.

How did Jira start?

Back in the day, Atlassian offered third-party tech support so you’d have to imagine two software engineers in their 20s running around answering tech support calls. Which is great because it pretty much showed them what the people wanted while teaching them what not to do when you want to make money!

Today, Atlassian is one of the 20 biggest software companies on the planet, alongside Oracle, Microsoft, Salesforce and so on. That’s no small feat, mainly because most of these tech companies were based in California, while Atlassian is from Australia where there wasn’t much access to startup capital back then. Look at us talking about the beginning of the century like it was three centuries ago!

Atlassian co-founders truly did it all on their own, becoming Australia’s first tech billionaires; and as Barney Stinson would say, that’s ‘legendary’! Now fair to say, they had less competition, less noise to deal with, and no investors trying to micromanage their business; which gave them the space to experiment, mess up and grow!

When was Jira created?

Atlassian co-founders Mike and Scott wrote a support system in 2002 that they named the Atlassian Support System, where people could file a ticket. The original business idea was to provide support for software companies.

Back then, our Atlassian co-founders were writing software documentation so good that they’d only get calls for 1% of cases; and they only got paid if they were successful in solving the case!

Can we please take a moment to appreciate the acronym of the original system that would later become Jira? 😆

From supporting software to building it

Less than a year into the service business, the Atlassian co-founders had realized that their true passion was not in supporting software but in building it. For example, they had built an app to put all of the documentation online; sounds familiar? They had also built an email archiving tool; we’re talking back in 2002, ok?

The first version of Jira took 3 months or so, then the 1.0 version, which was good enough for people to use, took around 6 months. The Atlassian co-founders charged $800 for the whole thing, and were happy to sell one copy per week! Can you imagine? They were hoping that people would go for a $400 maintenance contract, but back then, recurrent software updates were a bit unusual.

Back when marketing Jira cost nothing

Atlassian's marketing budget was very small (we’re talking $100 a week, or even a month), but back then, Google Adwords were new so CPC was acceptable. They’d attend software events and corner people to show them the product! They’d sneak in flyers and do all kinds of stunt marketing to get their names known.

Jira was complicated for people to understand at first, but developers liked it. And if one team had managed to solve one problem with Jira brilliantly, then lo and behold, the viral effect would ensure other teams started using the software. Functionality was added over the years of course, as people became huge fans, and by 2006-2007, Atlassian’s revenue was $20-30 million a year!

These are snippets of milestones because there’s so much more that went on over the years, but let’s keep it simple. Also, you can’t really separate Jira milestones from Atlassian so we’ll look at the whole story!

+ $102 million in revenue without a Sales Team!

2014 - Atlassian unlocks GIT for the enterprise

2017 - Atlassian gets a brand revamp and acquires Trello

What is the modern-day Jira?

When Jira was released back in the day, it was mainly designed for software developers. Today, all kinds of teams use it like HR, legal, IT, education, healthcare, and media and communication. This transition happened mostly after the launch of the Atlassian Marketplace in 2012, because third-party developers were then able to build project management plugins for Jira.

A few facts never hurt anyone

According to Atlassian, Jira is used for issue tracking and project management by over 180,000 customers in 190 countries. Not to mention that 83% of Fortune 500 companies use Atlassian products!

Jira is translated into many languages including English, French, German, Japanese, and Spanish.

Also, Jira is used for teams of all sizes.

What are the main aspects of Jira?

You can also choose Jira Cloud (hosted by Atlassian), Jira Server (self-hosted, but not for long), or Jira Data Center (also self-hosted but designed for specific environments).

What are the differences between Jira Work Management, Jira Software and Jira Service Management?

What are the four packages offered by Jira?

What are the fundamentals of Jira?

Jira (or Jira Work Management) is based on three main concepts: issue, project and workflow.

What apps does Jira integrate well with?

Jira integrates amazingly well with other tools. The list is endless, but to give you an idea: Slack, Google Sheets, MailChimp, Wordpress and so many more!

Is this the next generation of Jira users? 🤯

As a kid, I played a lot outside and read books; we only got a computer when I was 12 or so, but even then, I still preferred reading books.

Today, the software industry is so competitive that kids are getting familiar with software processes very early on! This is Jira Junior, used to schedule projects, write requirements, assign tasks and track progress for the younger ones!

Just to make it clear, this was announced back in 2013 on April fool’s day and there's been no talk of it since, but still... what do you think?

Brief intro to asset management and how to use Jira components to track assets. 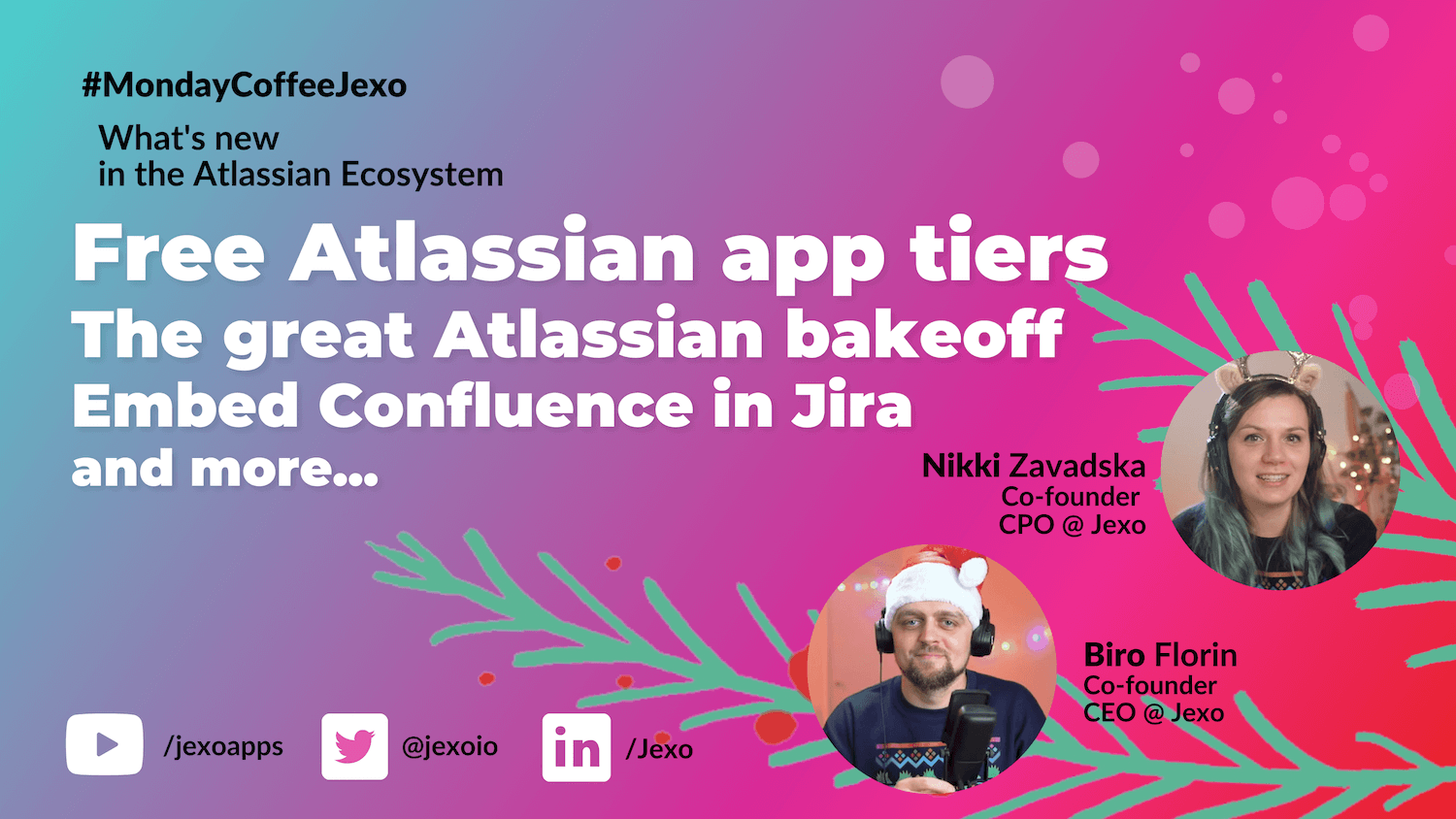